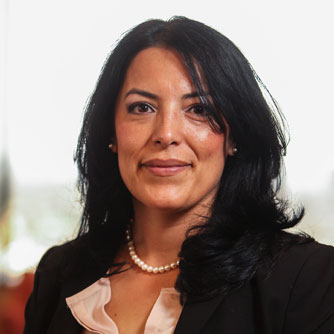 Erika Contreras is an attorney at Panish, Shea and Boyle. She currently focuses her practice on mass tort pharmaceutical and medical device litigation as well as on catastrophic personal injury, wrongful death, and motor carrier liability.

Prior to joining Panish, Shea & Boyle in 2011, Ms. Contreras was an attorney for the A.V. rated firm of Kussman & Whitehill where she represented plaintiffs in cases relating to catastrophic personal injury, product liability and medical malpractice. She has litigated cases involving defectively designed and manufactured tires and was involved in the Bridgestone/Firestone and Continental Tire Judicial Council Coordinated Proceedings where she helped injured Plaintiffs recover millions of dollars.

Ms. Contreras received a Bachelor’s Degree from UCLA in English with a minor in French. She then went on to attend Loyola Law School and obtained her J.D., all while working full time at Kussman & Whitehill.

Ms. Contreras is fluent in Spanish and French. She has appeared on Univisión – Channel 34 Primera Edición and has commented for the segment “Conozca sus Derechos.”